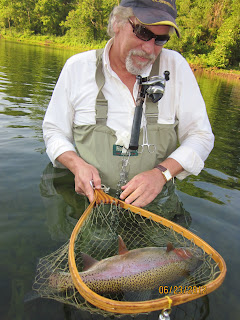 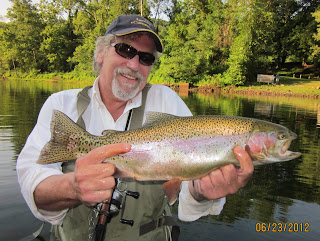 KENNY MARCUM - IS HOOKED ON FISHING!!! This 20 INCH RAINBOW gave the ZEBCO 33 drag system and its"backward reel feature" a "RUN" for its life.  Kenny hooked this fish and you could tell it was a big fish becasue it JUMPED out of the water twice and hit like a sack of cement. Kenny held he rod at 11 o'clock  and quickly switched to the back-reeling capability of the reel... saving the break off.  As she made many runs, Kenny just held the rod at 11 and waited her out... RELEASED WITH NO HARM -- GO CATCH AND RELEASE HER AGAIN AND AGAIN!!!!
Posted by DREW STILL at 4:30 PM