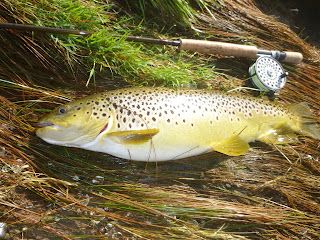 23" Brown Trout
This 23" Brown Trout  - Fight of the Month - November 2016 - hit my Pheasant Tail dropper and went airborne a number of times!!  I could see she was a monster as she jumped about 5 times.  I believed she was 25" as she would hit the water like a sack of cement.  She went cross stream and down, of course, and the top fly got snagged on a rock as she was so far away I could not keep the line UP.  As I maneuvered toward her, the top fly became loose and we were off to the races, downstream... After a few quick pictures, a quick release for another catch sometime in the future.  What a fight!!!
Posted by DREW STILL at 5:33 PM