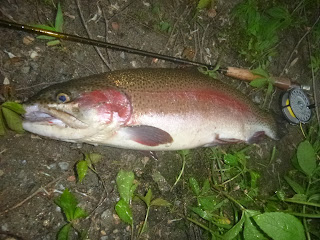 THIS 20 INCH RAINBOW was down deep in a fast water run... "right where he was supposed to be" and when he hit... I thought I was hung since the fly just STOPPED.   As a matter of fact, I simply gave a quick jerk on the rod to "release the fly from he snag" but I immediately felt the "HEAD SHAKE" and you KNOW what that means.  So, here is the scoop, I knew he was in there because a friend of mine, a week prior,  told me that he lost a "big one" in there... AND BANG... there he his released again for another day....  FLY FISH TENNESSEE.  GET OUT THERE!!!
Posted by DREW STILL at 10:53 PM